Is it just me? Or do people who have conversations on trains with their mobile phone held like a fully laden Ryvita (other brands are available) in front of their mouths irritate everybody?  Anyway it was October, freezing and I was a recovering alcoholic on my way to join my first group. Frankly I was not convinced that this was really my best idea.

I arrived at Wickford to meet with the group, a bit apprehensive as I didn’t have any experience of meeting fellow recoverees outside my nice safe Synergy group. They had put me on the path to getting my life back. I went into the kitchen and was greeted by a very nice Chinese lady who offered me coffee in return for assistance with the Metro crossword. After she had ascertained my reason for being there she then proceeded to tell me how good a time I was going to have!

After a few clues and a sip of coffee my reverie was broken by a leather jacketed man of authority. He stated “you must be Jim.” Shortly followed by “what size shoes do you take?”, “I have boots already” I stated, trying to be helpful. “That’s great!” He then walked outside with a roll up purposefully pointing in his direction of travel.

The next member of the group then came in from the garden his weather beaten face and flowing blond locks had ‘peace’written all over! “I’m Mr Tree” he said, in a soft Ulster brogue and already I felt maybe it’s not so bad after all!

The man of authority returned from his visit to the garden and said “right lets be off”. His name was Brian and he was to be responsible for the group. We climbed aboard our van and were transported through the Essex countryside (slowly) to Langdon Hills Nature Reserve to spend the next 4 hours.

You’ll remember the weather was miserable and the day was cold. I didn’t want to get out of this nice warm van but I would have looked foolish sitting there on my own. So we went to a tool shed and selected tools for our task. We were to dig out some planting areas which was to be a transformed into a herb garden.

After about ten minutes of scratching at frozen clay it was decided that this was not ideal. I wholeheartedly agreed because by now had decided this is not for me! I know now that in the early stages it is very easy to be swayed away from what you need to achieve sobriety. I’m just like everybody else so it was my turn!

Brian disappeared again (another rolly) assumption again, when he returned he said we were to move to the sensory garden. We walked for about five minutes with Mr Tree explaining that this was the main project. It was (is) an area of cleared woodland which is being made into the sensory area.  It will have a number of different environments for various plants, insects and animals to live. But also to build access for people with special needs to enjoy the space.

The nice Chinese lady also told me how much I would enjoy working there! (Her name is Maria and she is now a very good friend of mine, but this was then.).

When I walked on to this site I had one of those moments. I realise that I was supposed to be there! They say that as recovery progresses your senses are heightened. Well that was a moment that may have illustrated to me that this is true!

We were then introduced to the Project Leader Mr Chris. If he were a stick of rock he would have enthusiasm written all the way through! Although thinking about it that would have to be a big stick of rock to get all those letters in. He sat the group down and explained the idea behind the project. We also learnt some of the geological history as well as the history of the “plotlands” that were on this site until the early eighties.

From that moment on I have been totally involved in the whole concept of nature conservation. Included in that is community involvement and its value in aiding recovery through peer mentoring whilst working in this environment.

Right that’s the serious stuff, now for the fun part! 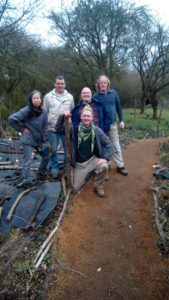 During the past 8 months we have learnt how to; excavate and lay paths, measure and build anti rabbit fences plant fruit trees, bulbs and plants, how to create bio diverse spaces for different species, the rudiments of forest conservation as well as how to integrate with other groups and individuals. There will be more information about progress at Langdon over the coming months.

As this project has developed we have been able to make contact with other sites run by the Essex Wildlife Trust in other parts of the county. We meet with them on Wednesday 5 April to discuss the possibility of setting up similar schemes. If you are interested in taking part please register here.

I will be keeping you posted with news and pictures of our progress. Keep looking for the way our story develops.

One response to “‘Dave’s Trees’ at Langdon Hills Nature Reserve”

‘What wellbeing means to us’ Campaign

END_OF_DOCUMENT_TOKEN_TO_BE_REPLACED

A new crisis mental health phone line has launched across Essex. The 24-hour service, run by Essex Partnership University NHS Foundation Trust (EPUT), offers immediate and specialist support to adults experiencing mental health crisis. Anyone in need can dial 111 at any time and select the option for mental health crisis (option 2). Callers will […]

END_OF_DOCUMENT_TOKEN_TO_BE_REPLACED

END_OF_DOCUMENT_TOKEN_TO_BE_REPLACED
We use cookies to ensure that we give you the best experience on our website. If you continue to use this site we will assume that you are happy with it.I AcceptRead more